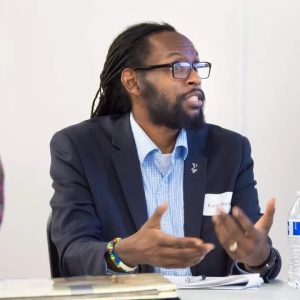 If you find yourself in The Magic City, I’d suggest you make a visit to the Miles College campus; here, you might bump into the Writing Center Coordinator and Assistant Professor of English, Kerry Brackett. Kerry has plenty of life stories and experiences to share that can range from his time at Berea College to his time as a US Navy sailor. In an interview with the Birmingham native, I learned that as a Berea student, he was an athlete for the Men’s Basketball Team, and an active supporter/member of the Black Culture Center as well as the Black Student Union. When asked what brought him to Berea College, Kerry replied,

“When I was a high school senior, I got a pamphlet about Berea— I was interested, but at that time the website was only a couple of pages so there was only a little bit of information about the campus. The Admissions Director [at the time] told me about a trip during Carter G. Woodson weekend, so I and (who would eventually become my roommate,) Marlon signed up for it. We took the trip to Berea and visited campus, & I was able to talk to the basketball coach at the time… but overall, what led to me making the decision to go was my mentor during Carter G. Woodson week, Chris. He told me, ‘This is an opportunity for you to hold your own— you don’t have to depend on anybody, you don’t have to put that burden on your parents.’ At that time, I was in a single-parent household, so I thought it was a win-win: ‘Hey, I’m able to go to college, go out of state & get outside the city of Birmingham, but also not put that burden on my mother.’ So that’s how it went down.”

As an African and African American Studies major with History minor, the 2008 graduate also made a few travels during his time at the College; Mr. Brackett visited Ghana for a Berea International Summer Term (BIST), and North Carolina & Florida for graduate school visits with Berea. Kerry even visited the Library of Congress in D.C. with his participation in the Undergraduate Research and Creative Projects Program (URCPP), in which he describes learning valuable insight into teaching and research under the guidance of professors that helped boost his confidence.

“I had never even thought of going to graduate school until that particular summer… I started helping Dr. Mack in his classes, especially his civil rights movement class; it got to the point where I was TA because I knew what he was looking for and I knew how he operated in the classroom. With that in mind after I graduated, all I could think about was teaching. At first, I thought I was going to be a history teacher because of my background at Berea— but once I got to graduate school, I wanted to become a better writer, so I went into English and Creative Writing.

And after that, even to this day, I still talk to Dr. Mack & Dr. Baskin, both of whom I look to as my mentors [in] my career as a professor.”

I can definitely see the impact of the labor program on Mr. Brackett’s life, especially at the Miles College Writing Center in the Learning Resources Center:

“The Writing Center was created for students on campus for any of their writing needs. Whether it’s writing an essay or writing a resume, it’s really for any assignment and any classes in which they need help with structures like grammar, punctuation, etc. As the coordinator, I go to different classrooms and talk to different professors to see the best strategies to help students prepare themselves. What I’ve noticed is that a lot of students don’t have that much writing experience: they’re intimidated by writing essays.

I wanted to create an environment where they can be comfortable… I’m always telling people that the Writing Center is a great vibe— there’s coffee, juice, and soda while being able to work on your essays. It’s been a humbling experience. On one end you’re working with the students and their writing, but on the other, you’re still working on yourself and learning how students learn from different perspectives.”

Mr. Brackett’s passion for teaching is undeniable! When asked what lead him back to Alabama, he responded:

“I didn’t know where I wanted to go after graduation because I was exposed to so much while at Berea, so I kept an open mind. My first location after graduation was in Virginia, so I worked there for a couple of years, and then I did end up going back home to Birmingham because my family is here— but I also felt inspired because I had been exposed to so much, & I knew that a lot of people in my area did not have that same opportunity.

When I got back to Birmingham, I found myself saying I wanted to teach what I see and what I’ve experienced… and even now, after being in the military and learning more about different cultures, there’s still so much more out there that I want people to experience… Everyone has a different story— I want everybody to have their own line so we are able to listen and we are able to learn.”

Do you have a take-home message you’d like to leave me with?

“Whatever you have your mind set on, pursue it with passion and then it will create you purpose.

I say that because you hear all the noise all the time… people asking you what you will do with your major or what you’re going to do after school, and so on and so forth— but that’s why it’s called a vision because you are the only one that’s going to be able to see it. It may not make sense to anybody else but that’s your vision.”

Have questions or want to chat with Kerry more about his story? Contact him directly at kbrackett@miles.edu.