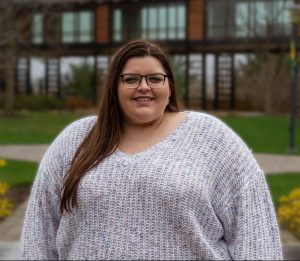 Alexandra Yuhas, a 2018 graduate of Berea College, has always had a driven personality. During our video chat, she said, “I’ve always sort of flocked to leadership positions. . .if I was going to be in a club, I was going to be the President of it.”  And to her credit, that drive of hers is already starting to pay off. Just three years after starting her post-graduate position, Alexandra was promoted to a leadership position where she now manages over a dozen people, and just before the pandemic went into full swing, Alex moved into her current home in Madison, WI, where she and her puppy have been thriving.

Starting from the beginning, Alexandra found her way to Berea College in quite the storybook fashion. In their early 20s, Alexandra’s father (got you with that one, didn’t I?) served as the basketball coach at Lindsey Wilson College in Columbia, Kentucky. When an away game for Lindsey Wilson brought the team to Berea College, Alex’s father was taken aback by our history and knew then and there this was the school for his future kids. When it came time for Alex to start applying, it was a done deal.

When it came to majors, Alex started her time at Berea by double majoring in Mathematics and Education Studies. However, when teaching began to no longer feel like the right fit, Alexandra soon discovered the magic of Mathematical Theory. “There’s like this whole other side of mathematics,” she explained with joy radiating through the screen. After focusing her attention solely on Math, Alexandra continued to excel in her classes, studied abroad in Ireland, and even served as President of the Berean chapter of the Mortar Board Honor Society – Alpha Sigma Chi – her senior year. Here Alex exemplified her leadership skills once more and now has the privilege of being one of the few students to be hand-picked for a membership in a society with over 100 years of history behind it.

Enter Career Development and the head of the office, Amanda Tudor. “She was instrumental in helping me figure out my path,” Alex continued.

From here, I learned that Alexandra took a course taught by Tudor during her final semester that focused on enhancing career development and readiness. Through the work done in that class, Alex found herself attending a conference highlighting women in STEM, “in Nebraska of all places.” However, it would be in Nebraska where she found her next step in life. “In one of the panels,” explained Alex, “I heard somebody who still works at Epic talking about all the cool stuff she does, how much she loves her job, and I thought ‘maybe I’ll apply there because she seems really excited about it’–and now I’ve been at Epic for going on four years.”

Four years that have been anything but uneventful. Epic is a private healthcare software company that builds and maintains software for healthcare organizations worldwide to store and protect patient records–providing better patient care and managing life-saving data. “It’s definitely a small area of tech where you feel like you’re making a huge difference in the actual lives of patients,” Alexandra said. During the pandemic, Alex saw firsthand the impact of the COVID health crisis within the healthcare industry and watched the evolution of the pandemic reflected through data. Her team had to quickly develop new ways of cataloging COVID symptoms, putting her front and center to see firsthand the response to the first states’ vaccine sign-ups going live: “I saw their server spike with all these people immediately going to sign up for vaccines, and we could just see it in real-time. It was wild!”

Alexandra also explained how Epic chose to prioritize the health and safety of the community over profit–suspending fees and payments, opening a daycare in spare buildings for frontline workers, and offering the vaccine to all employees on campus once they were available. “It was definitely a ‘let’s get through this together’ sort of mentality, and it’s really cool to work for a company that felt like that.”

Today, Alex is continuing to grow with the company and is even working towards making her success the reality of more women like herself. “I think when I graduated,” Alex explained to me, “there were 10 Math majors, and five of us were women –  which was astonishing – and we had more women math professors than men at that time too. But then when I started at Epic, you know, I started on a 26-person team, and I was the only woman. We’re currently a 57-person team with maybe four women. So we’re definitely still in the minority, but I’ve worked a lot with recruiting at my organization and we ended up hiring something like three or four women recently!”

When thinking back on her time as a student versus where she is now, Alexandra said it the best, “Berea’s hard–they don’t make it easy to get through, but they make it worth it.”

Would you like to know more about Alex, her work, and how she got here? You can contact her here at alexandra.yuhas@gmail.com.

Are you interested in working with Alex and the rest of the Epic staff? Learn more about the open positions here.