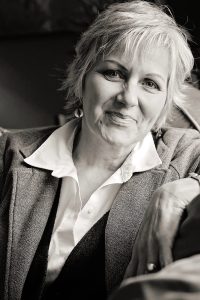 Jeanne Marie graduated from Berea College in 1984 with a degree in Philosophy. But don’t let that fool you – while Jeanne Marie can wax and wane philosophically with the best of them, Jeanne’s spent much of her career putting her thinking skills to work on bringing sustainability and environmental awareness to her community and everyday life. Or, as she puts it, “Economy, ecology, equity… It’s not just for wealthy people to be sustainable; you have to make it so that it really supports everybody.”

And in that vein, Jeanne Marie has stayed true to her values. Fundraising for most of her life, Jeanne has mostly worked with community development organizations by giving folks and communities the resources to improve themselves. Starting right here in Berea as a Research Associate for Mountain Association (formally MACED), Jeanne Marie hadn’t initially seen herself working in this field. She said, “I didn’t know when I graduated what exactly what I was going to do, and nobody had talked to me about nonprofit work.” However, after working with the Mountain Association team, Jeanne Marie found she really enjoyed the work she was doing – and it was a lot of work! Researching, writing, organizing, activism, legislative work, and then raising the money for the program she was directing, Jeanne eventually decided to focus her time and energy on fundraising and supporting the work others were already doing.

With that decision, Jeanne cofounded Communities by Choice, a nonprofit that grew out of the demand for the work Mountain Associates was doing outside of the Appalachian area. “When I started fundraising full time, I had never been a development director. I didn’t know how a development program was supposed to run. I just started reading everything I could get my hands on and figuring it out as I went,” she said. Working primarily in Oregon and along the West Coast, Jeanne Marie worked with teams of community members and supported them in community decision-making and developing projects. After choosing not to move to Oregon full time, Jeanne found herself at Berea College, serving as Director for the Entrepreneurship for Public Good (EPG) program and the Appalachian Fund.

After her time at Berea College, Jeanne Marie took her ever-growing skills two hours east to work at Hindman Settlement School, a nonprofit and educational hub since 1902, well known for its service programs centered in the Appalachian region. During her ten years at Hindman as the Communications and Development Director, Jeanne Marie met many musicians, artists, and writers – from aspiring to renowned. The sudden death of Hindman’s Executive Director saw Jeanne acting as the Interim Director until they found a replacement. Despite being offered the position of Executive Director at Hindman, she knew it wasn’t the right fit. So, after seeing the transition through, Jeanne Marie left Hindman and once again made a leap of faith decision and started her own consulting business.

For three years, Jeanne met with and coached nonprofits and community foundations on how they can best reach their goals through fundraising. And while many of us would consider this a true success story, Jeanne Marie admits that this was “a really scary place to be.” Having to rely entirely on herself, with none of the added benefits a traditional job might provide, Jeanne Marie found this to be a time for a lot of self-reflection, saying, “It made me stop and think about what do I value? What’s important to me? When I was at Hindman, it felt like that job was a certainty, that I could work there for as long as I wanted. One thing I learned is that there is no certainty. . . And just learning to be comfortable with uncertainty was a big experience for me.”

Once deciding to get back in the office, Jeanne Marie started her career at radio station WEKU (88.9). As a National Public Radio network member, WEKU works out of the EKU Campus to give more than 1.5 million listeners in Eastern and Central Kentucky the trusted information and spectacular entertainment they want. Jeanne Marie’s role as the recently appointed Director of Corporate and Community Support finds her once again working with the surrounding community and businesses to fund a wonderful and necessary project. When discussing the transitions she’d made recently, Jeanne Marie admitted it had come with some downsizing, saying, “Everyone was like ‘Oh my gosh! How could you -’ and I just know that I’m happy. I have what I need, and I now know what I need. I know what makes me happy, I have a job that’s not super stressful, and I have free time.” Reflecting on all the changes she had made over the years, Jeanne said, “It’s taught me a lot, just about what you value, what you take for granted. And that life’s going to throw [things] at you, and you just have to figure out how to deal with it the best you can.” She added, “I don’t think most people that are in college now should have this idea that they’re going to have one career, [they should know] that it may change over time, and you just have to be flexible.”

this flexibility, I asked how Jeanne Marie thought her Philosophy degree helped her along the way. “Almost any problem you can solve by dissecting it into smaller pieces and just asking the questions that relate to each piece,” she replied. Continuing, Jeanne Marie enthusiastically informed me that her background in Philosophy has served her nothing but well. She noted that they spent some class periods discussing a single paragraph, saying, “you really learn how to dissect things and look at the individual pieces.”

Today, Jeanne Marie is working on her goal of doubling their funding along with stepping up WEKU’s digital advertising presence. “I guess my goal is to take what I’m doing now, do it better, and establish the protocols for it, so what when I do retire or whatever, there’s something that’s behind me that’ll keep growing.” So, the next time you turn that dial to 88.9 and tune into WEKU on your way to work, you can thank Jeanne Marie for her help keeping the lights on.

Would you like to know more about Jeanne Marie, her work, and how she got here? You can contact her here at jeanne_marie_hibberd@me.com.

Are you interested in working with Jeanne Marie and the rest of the WEKU staff? Learn more about the open position of Digital Marketing Coordinator and apply here.