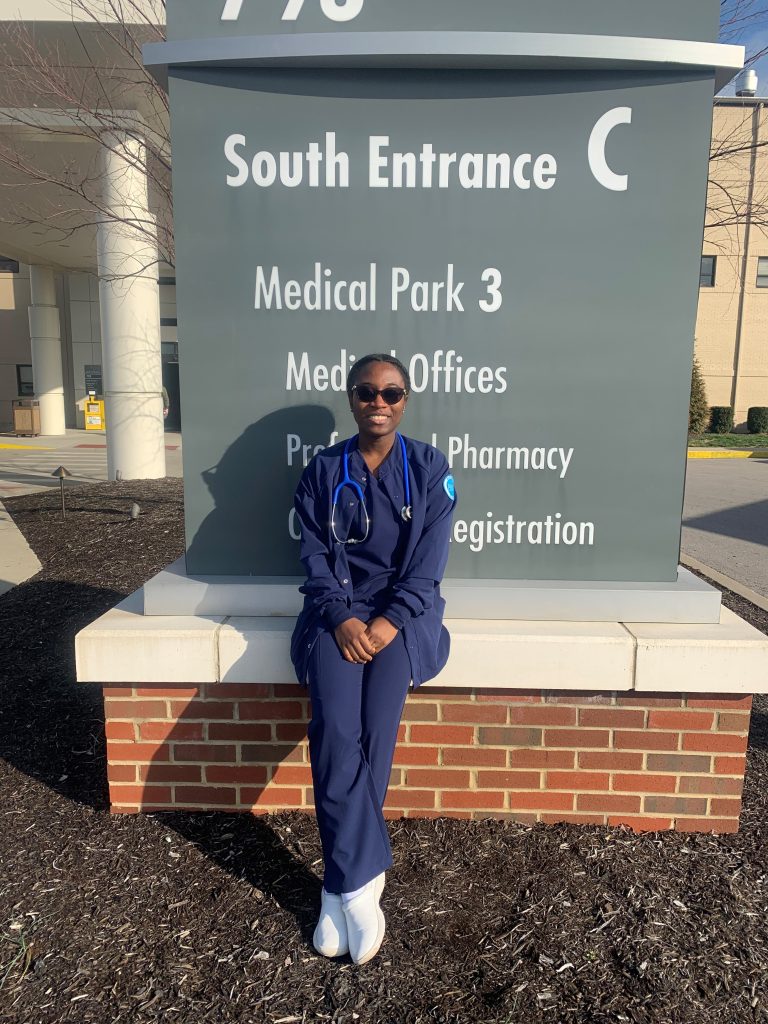 Agnes Dotse is a senior nursing student at Berea College whose path to nursing was not a straight line. During her first semester of classes at Berea College, she realized that she wanted to pursue nursing to help and take care of people. During her internship this past summer, Agnes saw her calling become solidified as she spent time with patients. She spent her summer working at the Cleveland Clinic in Ohio, where she feels she became re-energized and refocused on the work towards her goals. Agnes commented, “You need your why— your motivation to get you through those days where you just don’t feel like doing anything. And that’s for any major, I think.” While she was at the Cleveland Clinic, Agnes worked on the main campus’ Internal Medicine and Telemetry floor, where she saw a variety of patient profiles on a day-to-day basis. Agnes emphasized the importance of the opportunities she had during her internship working with a nurse; as a nursing student who will soon begin the shift towards becoming a nurse, she feels that her summer experiences allowed her to grow and gain first-hand learning. Agnes explains that she was able to explore different units of the Cleveland Clinic network— a beneficial opportunity as she explores the many avenues of nursing to understand what she wants to pursue. She also expressed feeling very appreciative of the great directors and superb nurse mentors she had during the summer program in which she participated. She especially praises current nurses for working in a time in which they are most needed.

Agnes tells me that she holds a positive attitude and mentality towards her classes at Berea College because she has always aimed to learn something from each of them— from her theatre class to her introductory psych class, she believes that all her classes have shaped her in some way, shape, or form. Agnes especially appreciates Dr. Linda Ray, the first professor to expose her to nursing, for her “tough love”; she describes her as a fantastic professor who acts straightforwardly and bluntly in a caring way. Agnes also says that Dr. Ray goes beyond the books for her students through her considerate and understanding ways.

As for work, Agnes began working for the Student Life Department during her first year at Berea College; having held serval labor positions within the department, she has not left Student Life since. As of last year, Agnes works as the Student Coordinator of the Alumni Building on the ground floor, where she works with the Espacio Cultural Latinx (ECL). She expressly praises her supervisor Mr. Juan Jaimes Costilla, for his active efforts and exceptional leadership in the ECL as she learned to take on her role’s responsibilities. Agnes says, “he expects the best, but he’s not leaving you to fend for yourself. He’s there if you need help or guidance; I can go to him [and] that’s really helpful… I can talk to him, and he’s willing to help me learn.”

The most valuable resources for Agnes at Berea College have been the Internships and Career Development (ICD) Office and the Center for Teaching and Learning (CTL). She says that she appreciates the ICD Office’s resources— such as professional clothing funding and resume writing. As for the CTL, Agnes thinks that its Writing Resources are very helpful. She says, “I go to them for help with my papers, and I’m a senior: even seniors use Writing Resources! That should tell you something, so definitely go.” Agnes is a very community-involved student on campus; she is on the Berea Women’s Tennis Team, the Mortar Board Honor Society, a Peer Mentor of the Students United to Create Cultural and Educationally Successful Situations (SUCCESS) Program, and a founding member of the campus’ Nurses Christian Fellowship (NCF).

When asked to reflect on her first year at Berea College, Agnes says she would have told herself to enjoy it more and not wear herself out; however, she credits her roommate and family, especially her mother, for helping her and being her support system. Agnes encourages students to find their “campus families”— for Agnes, this is her Ghanaian family, tennis family, ECL family, and nursing family. After graduation, Agnes says that her plan (for now) is to work for about two years and afterward pursue degrees to become a Nurse Practitioner and receive a Doctor of Nursing Practice. Agnes ‘ thoughts regarding her life plans are: “…it’s about the journey. I keep telling myself, ‘it’s a marathon, not a sprint’— like, okay, you didn’t get there this year. Mm, that’s fine. We’ll get there and learn some things along the way.”

Agnes graduated in May 2022 and will continue on to full-time work the nursing field. Have questions or want to chat with Agnes more about her story? Contact her directly at hernandezd@berea.edu.