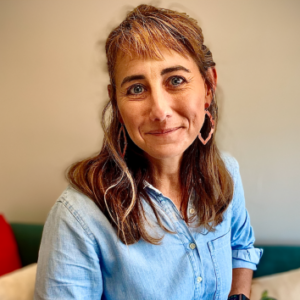 If you find yourself walking through the doors of Nightingale Behavioral Health, at 210 N Broadway St., Berea, KY., you’ll instantly be greeted by an array of beautiful greenery to your left and a smiling face waiting to check you in on the right. After confirming your appointment, it’s just a short wait until you’re waived in by one of the physicians, and if that happens to be Nurse Practioner Rebekah Easton-Hogg, you’ll follow her and a short path of vinyl multicolored birds to her office.  This was my experience meeting Rebekah for the first time as she and I sat down early on a Tuesday morning to talk. On this particular day, I was lucky enough to run into one of her two sons, Sterling Ray, who wasn’t feeling well and so accompanied his mom to work.

But this is the type of small-town, family-oriented atmosphere Nightingale provides. With its “soft” opening in the bag, and the official one planned for December 11th, Rebekah explained during our conversation that she’s joined by a Midwife, an Herbalist – “I guess Apothecary really” – and her husband and fellow physician, Dr. Edd Easton-Hogg, who’s also a Berea Alum. The four of them cover a range of issues, from psychiatric care, as Rebekah is double board-certified, to gender-affirming and general healthcare.  Accessibility and inclusion were on the mind as she explained to me, “I’m trained in Western medicine, but I like the option for folks who really prefer something even more earthy,” noting that that’s where the practice’s different specialists step in.

Despite being in medicine for over a decade, Rebekah first earned her degree from Berea College as a graduate of the Women and Gender Studies department in 2000. Ensuing her time working as a server at Boone Tavern, Rebekah created a position for herself working with Habitat for Humanity (at the time being sponsored through Campus Ministries, but now acts as its own program through Berea’s Center for Excellence in Learning through Service). After graduating, she worked as a domestic violence advocate in Fayette County, and reflecting on this time, she said, “that was kind of my segue, I guess into being a helper, being in the helping careers.” Domestic Advocacy led Rebekah to the medical field, first as an RN, then as a physician in Family Medicine, “and now also in psychiatry!”

She then worked in Lexington before moving back to Berea and entering a position at the White House Clinic. During this time, however, something was notably missing for Rebekah. “There was the need for psychiatric care. A lot of folks are one-car families or no-car families, especially in the surrounding counties, and so, if as a family practice provider, I would say, ‘where’s our nearest psychiatry care’ [the answer is] London or Danville, and you know, for those folks in the outlying counties sometimes bigger cities can be pretty taxing. And then having to borrow a car from a neighbor, pay for gas? It’s hard to do.”

She went on to explain, “Ever since I was probably little. . . growing up in a very rural place. . . and I guess understanding more about folks who might be on the outskirts – the outliers. . . [I learned that] the community sees folks as outliers who have a mental illness or who are neurodivergent. . . and I think I started recognizing a lot of differences in how people are treated.” And so, Nightingale Behavior Health was born.

Currently, Rebekah Easton-Hogg lives in the area with her husband, two sons, and dog and is “always working towards” being a better parent and provider through balance. This will be the first time she’s able to work in the same practice as her husband, and she is looking forward to this “new season of life.”