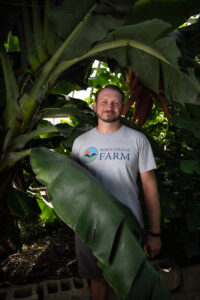 Kenneth (Kenny) Holbrook never expected to find himself back on a farm after he left his family home in eastern KY for a degree in Nursing. Don’t get him wrong, there are numerous fond memories Kenny has of growing up as the second oldest of seven kids, “picking caterpillars off leaves,” and caring for the animals they had from time to time. In fact, caring for those animals was part of what clued Holbrook into how much he enjoyed helping others. But spending his day outside in a field? This didn’t seem like the life for him.

The summer before Kenny began his time here at Berea College, he was fully invested in Nursing, working as a Nurse Assistant at a nursing home in Lexington. “But after a while,” Kenny said, “I started to miss [farming].” This realization came around the same time his wife began to remark that Kenny was becoming “a mad scientist,” with all of the plants he had growing in their kitchen. But still, Holbrook was not convinced to take on such a big career change. He had dabbled in Agriculture during his time at state university and found that his experience with such large classes was not satisfying, and did more to remind Kenny of what he didn’t like about Agriculture than what he did.

So when asked, then, how he got to Berea, and to the college farm at that, Holbrook humbly admitted, “I sort of lucked into my position.” Having accidentally found Eco Village housing during a Google-search-gone-askew, Kenny finally began to give Agriculture a serious thought and decided that Berea was the place to do it. Before transferring to the college Kenny had a long conversation with his now-boss Janet Meyer about his past experience with farming, which landed him a position as a student manager on the campus farm. Within a year Holbrook became manager of the greenhouse, and by the next, he was overseeing both farms – Horticulture and Livestock. Now in his second year as a BereaCorps employee, Kenny is the Hightunnel and Equipment Improvement Associate Manager, where he works with the solar panels on campus, integrating newer/better farming equipment, and of course, fixing campus’s current equipment. Holbrook credits his ability to take on some of the more engineering tasks to some of his old hobbies. Laughing, he said “I did a lot of legos as a kid.. . and I like working with my hands. . . So I think between the two I got good at visualizing things in my head.”

As for how Berea compares to Kenny’s previous experiences with learning about Agriculture, Holbrook had nothing but good things to say about his teachers and classes. He highlighted Professor Parr for making her classes fun and interesting, and the Food and Agriculture of Africa as being the most influential class he took. For anyone interested in pursuing a future in Agriculture, Kenny recommends reading Tomorrow’s Table: Organic Farming, Genetics, and the Future of Food, by Pamela C. Ronald and Raoul W. Adamchak, and The Lean Farm by Ben Hartman, both of which are taught as part of the Agriculture and Natural Resources curriculum.