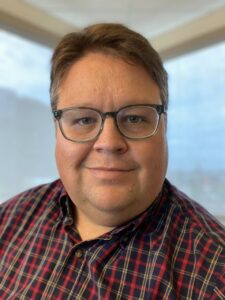 Christopher Freeman graduated from Berea College in 2003 with his BA in History and set off to Louisiana. Over his four years, Christopher found himself with multiple labor and TA positions, each one acting as a stepping stone for what was next to come. After a summer internship with the Loyal Jones Appalachian Center creating on-campus exhibits, Freeman found himself working as a part of Berea’s library team in Special Collections and discovered a love for researching and cultivating information. “Gathering all these different diverse pieces of information. . . you’re just trying to get a handle of it so that you can then organize it. You’re also having to think, ‘what is this going to look like for someone else who’s going to use it?’”

After graduating, Christopher followed an opportunity created through one of his positions and fulfilled a Graduate Assistantship at the Louisiana State University. He also worked within this college’s Special Collections as an editor for the Civil War Book Review. Freeman spent the next decade in Baton Rouge. However, “following a girl,” Christopher ended up in New Orleans, where he now works as a Portfolio Specialist within Tulane University’s Office of Advancement.

Freeman describes Tulane’s Office of Advancement as “a combination of Alumni Relations and Fundraising.” He first found his footing working with data via their pool of Alumni looking for wealth indicators – gathering, cultivating. Christopher now splits his time supervising others and working with them on identifying and developing relationships with possible donors.

Freeman finds himself right in the middle of introverted and extroverted, “where the data meets the day to day,” and notes that what he loves about his job is, “you don’t start with any assumptions of what [the data] tells you,” saying, “you have to let the data tell you story as you analyze it.”

(And as for the girl, Freeman is happily married with two children.)

Have questions or want to chat more with Christopher about his story? Email Christopher directly at cfreeman6@tulane.edu.